I used this picture, taken at the Stewart’s in Selkirk, in a presentation about communication.

My point was that some things, no matter how simple, still need to be explained. Things like “DO NOT DRINK” the cleaning products.

I probably did not need to mention that this was in Selkirk, but what Glenmont person can resist a Selkirk joke? You see, people may think all of Bethlehem is snooty, but in truth, the town has its own pecking order.

We could also go back up the scale, but suffice to say, you think anyone above you on the list is a condescending ass.

What do the people in Ravena do? They disapprove of  Coeyman’s Hollow. Coeyman’s Hollow? Westerlo. Westerlo? Medusa… and so on. You could draw a line all the way from the Capital Region to Arkansas.

Next time you generalize about Bethlehem, just remember this: it’s the Slingerlands and Delmar people who are contemptible, not the lovable crowd in Glenmont. But don’t get me started on Selkirk.

The area around Hilton Head has many beautiful neighborhoods of a sort you don’t see around here. These well-planned developments have wonderful landscaping and homes — and many have a gatehouse and guard at the entrance.

It’s also worth noting that  a lot of these private enclaves for the affluent have the word “plantation” in their name.

If you look up plantation in the dictionary, the top definition is that it’s a farm for cash crops — but culturally it seems like a loaded term, especially in a place like South Carolina.

I’m sure that some of these communities are located on grounds that were actually plantations in the past, and yes, I get that you probably don’t mean it as a reference to the antebellum South. I understand,  but here’s the thing: you’ve got this place where the wealthy white people live behind a gate and it’s called the plantation? It just feels a little odd.

Americans were so outraged with the Ferguson grand jury decision that many of them actually tweeted about it.

If only we’d had Twitter during the Vietnam war and the civil rights movement. Who knows what would have been possible with so many people sitting on their couches blurting out their opinions to nobody in particular.

Yay, Americans are getting smarter!

You’re probably saying, “Rob, that’s not very likely. What proof do you have?”

Easy. Every Thanksgiving, I scour the internet for videos of people having horrible mishaps when frying turkeys — and these videos are getting very hard to find. The most recent fryer fire I could locate was uploaded to YouTube more than a year ago, on December 10, 2013.

Combine the lack of videos with the proliferation of phones that shoot video and it can only mean fewer fires.

What you will find on YouTube are many videos of fire departments staging turkey fires to demonstrate the dangers of hot oil, open flames, turkeys and (presumably) alcohol. Having served as a firefighter, I can tell you that they pass up few opportunities to light things on fire for training. Here’s a good one:

So, if we connect the dots we can surmise that all these demonstration videos have made a difference and yielded smarter Americans. Now, all we need are some videos about how local talk radio can rot your brain…

Maybe you’ve noticed that the building’s distinctive profile has been sullied by the construction of some sort of storage shed on the roof.  It’s bad enough that the Corning Tower has sprouted antennas in recent years, but the shed is nothing less than a huge wart on the nose of one of the city’s most important landmarks. 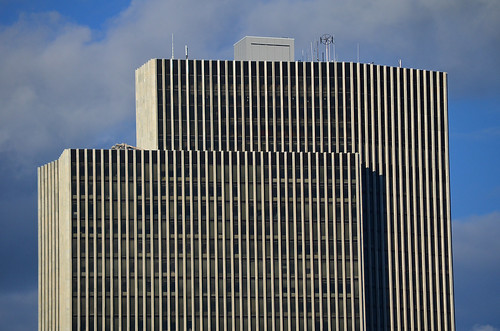 Most of you probably don’t care, but it’s wrong to mess with the vision of the architects — and of Nelson  Rockefeller himself — by ruining the clean lines of the building. According to Joseph Persico’s terrific biography, Rocky was an aesthete who was famously controlling over the design of the Plaza; the shed would have driven him mad.

A wider view after the jump…
END_OF_DOCUMENT_TOKEN_TO_BE_REPLACED

The Marines know a thing or two about ceremonies.

We were at Parris Island in May for my son’s graduation from recruit training.

The day before graduation, each platoon was introduced and marched before us in formation. It would be the first time we’d seen our sons and daughters since dropping them off months earlier and we were all eager to spend the afternoon with our kids.

But before allowing for the hugs and photos, there was a special event. We had the honor to look on as a dozen new Americans were sworn in under the Naturalization at Basic Training Initiative, which allows recruits to become US citizens when they graduate basic training.

There is no easy road to citizenship, but the one these men chose was a doozy. They’d just completed a gruelling training regime, and they’d made a commitment to years of service. Now, raising their hands to take their oath, they are newly minted Americans — complete with a full-time job, and the prospect of training and educational benefits that will give bring them great opportunity.

All of our forbearers came here from somewhere else, and for all the things we hear in the news that are wrong with immigration, here is something right.

We were sitting in a box at Saratoga one fine August afternoon. I know that sounds fancy, but if you’ve ever sat in one those boxes you know it’s more cramped than glamorous. And if you’re like me you’d rather be at a picnic table with a cooler full of beer.

It was hard not to notice the activity behind us as a stream of people stopped to say hello to an older man in nearby box. We almost fell off our uncomfortable chairs when it dawned on us that it was Mickey Rooney.

Rooney was sitting alone with his racing form, about as far away from the finish line as you could get and still be in one of the “exclusive” boxes.

Now, working in TV I’d met tons of well-known people — the most famous of whom was Oprah Winfrey. But Mickey Rooney? He was a freakin’ legend. Regardless, we did our best to play it cool, acknowledging him without seeming like amateurs. We inquired with our waiter about sending over a drink, not knowing he’d knocked off the booze years before.

So we went back and forth with a little small talk about the races and such, without being intrusive. Today I would have invited him to sit at our box; it didn’t occur to me at the time that he actually might have joined us.

Naturally, we all lost money on that one.

Nothing was said about the sure thing that was not so sure. If only we could have had a preview of Mickey Rooney’s obituary we would have known that he’d visited many racetracks in his lifetime, and more often than not, made impressive contributions to the sport of kings.

So, here’s to Mickey Rooney. He never lost his taste for the ponies — or his ability to charm an audience.

Do people have no idea how to act any more?

For example, I went to see Romeo and Juliet on Broadway. Not my first choice, but my wife has always wanted to see the Shakespeare classic performed — and since this production involved Orlando Bloom removing his shirt… well, you get the idea.

Anyhow, the family in front of us spent the entire first act busily rustling around with their snacks. I don’t know what they were into — pretzels, crackers, cookies — but it was feckin’ noisy.  My ears ain’t what they used to be, so the distraction made it hard for me to focus on the play. And it doesn’t help that I have a mild case of misophonia.

Now, everybody knows you should unwrap your snacks before the lights go down, so not to annoy the other patrons. That’s a theatre rule, rather like never mentioning the name of the Scottish play. You just don’t do it!

They quieted down, thank God,  in the second act. Maybe the parents — well-heeled Connecticut types — remembered their manners. Or maybe they caught wind of us grumbling during intermission.

Either way, were able to enjoy all the dying with a little peace and quiet. And the rippling abbs, too, if you’re into that sort of thing.

It’s only takes a couple of hours to get from Albany to New York City — but sometimes it seems a lot farther away.

I nearly fell out of my chair when I saw this:

Seriously? Hipsters? Apparently, the people at the paper just heard of these exotic PBR drinking, ironic t-shirt wearing, eccentrically eyeglassed creative-types in Brooklyn. And it’s so exciting, they want to see if they can dig up some real live hipsters around here. I’m betting they’re in Troy!

Look, the hipster trend was so firmly established in 2003 that it was already being roundly mocked — and if you care what New York magazine has to say, hipsterism was already dead by 2010. I’m not saying that the hipster sensibility has disappeared, just that it’s really, really (really) old news.

At this stage of the game, doing a story about hipsters makes you seem like… well, rubes. Or at the very least, a tiny bit clueless.

Anyway, I look forward to next month, when the Times Union will be doing a big feature on punk rockers.