A guy I used to work with believed that toilet smells are hazardous to our health. He’d gesture down the hall to the well-used men’s room. “That first floor bathroom is going to make you sick,” he explained. “When you smell someone’s shit in there, you’re breathing in tiny shit particles,” I nodded in agreement, not because I agreed, but because I didn’t want him to know that I thought he was nuts.

No, I didn’t agree with his particle thesis, but nobody could dispute that the bathroom often smelled revolting. In the interest of full disclosure, I hold the controversial view that people should poop at home, not at the office.

So, one day I decided I’d had enough. Early in the morning, I set up some old sneakers and a pair of jeans in bathroom so it would appear that someone was seated in the stall. During the day, I saw several flustered people go in the bathroom and exit quickly seeing the crapper was occupied. Those needing to use the urinal did so without being subjected to a toxic atmosphere.

Finally, very late in the day, someone peered over the stall door and discovered the ruse. I’m not going to name the person who peeked, and believe me, it’s a name many of you would know.

Some of you will see this as a cruel prank, but is it really crueler than fouling a public space you share with your co-workers? Here’s some advice if you really need to go: take it to another floor.

Look, when you get to be my age, you’re going to be subjected to all sorts of dire things. Like a colonoscopy.

A colonoscopy, as you probably know, is when they pass a camera inside you and have a look where the sun don’t shine. The good news is that you’re totally out of it during all of this, in fact, moments after sedation, you don’t care what they do to you.

Many people will tell you that preparing for these tests is an odious ordeal. They’re half right.

And hey! I have some pictures from inside my colon if you’d like to see them. No?

Some of you are saying, “Whoa, Rob! TMI!” Nonsense. This is a routine medical procedure and you’d be crazy not to do it. Colon cancer doesn’t get the sort of high-profile attention as other health risks, perhaps because it’s not a very glamorous region of your body. This is nothing to be squeamish about — and it could save your life.

By the way, hats off to the doctors and nurses who do this all day long.  You think you deal with a lot of assholes all day long?

The NY Times recently did a great feature called How to Start Running — but for many people, How to Keep Running might be more useful.

I’ve been at it since the early 1990s, never once on a treadmill and almost always before sunrise. It’s not getting better, unless you consider covering shorter distances at a slower pace as somehow better.

I may be long past my peak, but that’s OK.

These days, my runs are tracked on a GPS watch, but back in the day, I scribbled notes in composition books, noting my route, distance and time. Here’s a page from nearly 20 years ago: 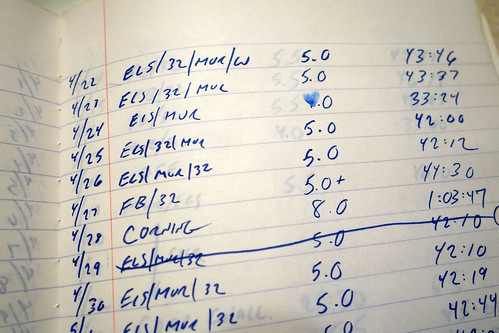 Wow, I was really something. Today? Shorter and slower.

Running as a metaphor for life is a well-worn shoe. It’s usually invoked to speak of endurance and perseverance. The value of hard work in achieving a goal. But the sad truth is that it’s also about decline and decay and giving way to age.

But so what? I hope I run on the day I die, even if it’s just for a short distance. Even the most miserable run makes any day better.

Mark Zuckerberg made news last week for his run through Tiananmen Square — both for exercising during a period oppressive pollution and the lousy optics of doing so where protesters were slaughtered in 1989. But something else caught my eye: the Facebook founder noted that he’s hit the 100 mile point for 2016.

This is all part of Zuckerberg’s Year of Running health campaign, which challenges participants to reach 365 miles by the end of 2016.Introducing the program, Zuckerberg said, “This is a lot of running, but it’s not a crazy amount.”

Now wait — my running is nothing to brag about, but if I’ve run more miles this year than a fit young man like 31-year-old Mark Zuckerberg, well, what the hell?

Ten years ago — in my 40s — I ran a marathon. Not a fast marathon, not a great marathon, but listen here Facebook boy, I ran 26 miles in one day. No, I can’t do that anymore, but if a fat old man like me (old enough to be your father, I might add) can go out and run three miles before dawn, you can do better than a mile.

So here’s a challenge: you want to motivate me to exercise, how about buying me fifty pairs of Saucony Triumph ISO 2 running shoes? At two pairs per year, that should pretty much last me until I’m too dead to walk around the block, much less run.

But seriously, just kidding: good job with your mile. Maybe we should get you a participation trophy, or something.

The whole running thing is not what it used to be. Ten years ago I ran a marathon and today three miles is sometimes a struggle. But you get out there and do it. Why? As the man said when asked why he’s hitting himself with a hammer: because it feels so good when I stop.

Early in the morning when it’s dark, odors are amplified. You can smell the cigarettes people are smoking in their cars. Sometimes their smoking weed, even though it’s 5am.

Skunks, garbage trucks, wood stoves. Wet leaves, cut grass. Sometimes the smell of rain coming. After rain there’s that peculiar odor which I used to think was the smell of worms, but is actually not.

But every year you really know the holidays are here when you smell the Christmas trees. There’s a garden store along my route and every year a tractor-trailer shows up overnight full of evergreens. The store sets the trees up and strings of those bare bulb lights so people can shop at night. Then, for one or two mornings, the area near the store has that smell.

The smell of Christmas.

It was 4am and Maeve was sprawled on the floor. She was cool to the touch and unresponsive. I took this picture to document how she was found — I couldn’t just leave her there until my wife got up — and knelt down in front of her. That’s when I saw that her eyes were open.

We’ve been giving Maeve insulin shots for several years and now she was in trouble, most likely extremely hypoglycemic, and she wouldn’t last long without help.

We called the pet hospital and they advised that we get some sugar into her — just as you would with a human — and their advice was to rub Karo syrup into her gums. So there I am, at 4:30, on the floor with a handful of sticky syrup in one hand and a cat in the other.

She gradually grew more alert, and when I showed her a small plate with a tablespoon of food on it she sat up and ate. Soon she was up on her feet, but a bit shaky; we herded her into the cat carrier for her trip to the vet. It turns out her diabetes was in remission and the insulin was making her blood sugar plunge too low. I’ll be damned.

I’ve told this story to a few people and the wondered if the cat’s physiology may hold some sort of medical secret that reverses diabetes. Actually, it’s not uncommon for diabetes to go away in cats, but wouldn’t that be something? Imagine the side effects listed in the commercial:

Some people may experience an urge to chase mice. Taking this medication could cause you to lick your hands and feet and curl up in someone’s lap…

So, all is well with Maeve the cat. Two days later she’s acting completely normal. You know, by cat standards, of course.

Wouldn’t it be great if there were voice activated toilet seats? You just could walk in and tell it to go up or down and never have to touch the damn thing.

Well, we don’t have them — so until that wonderful day arrives you should just do what most sensible people do: use your foot.

This leads to an interesting question: how dirty are your shoes from touching toilet seats?

“How dirty” stories used to be all the rage in TV news. I did promos for stories where we tested hotel rooms, household items and common objects you find in public, like doorknobs and water fountains. We’d swab the things and send the samples to a lab for analysis. Two weeks later? Instant sweeps story!

Anyway, way back in 2008, ABC News did a story about dirty shoes. The results? Your shoes are astoundingly dirty — maybe even the dirtiest things you own. I’m not trying to freak you out here, but you may be making a toilet seat dirtier by touching it with your filthy shoe.

Just something to think about. Meanwhile, I suppose in the future it will be odd to hear people calling out “up” and “down” in public restrooms.

In the kitchen one recent morning, I set about to slice up a watermelon.

My wife was reading the obituaries — as she often does over coffee — pointing out the men my age who’d died, some of them quite suddenly.

“You wash these before slicing them, right?”

“Why would I wash a watermelon?”

“The same reason you wash anything — except melons are worse. They grow on the ground and the soil could be contaminated with E. coli. I read somewhere that the farm workers don’t have proper toilet facilities and they poop in the fields. The E. coli gets in the soil, the soil touches the melons… next thing you know, you’re in the hospital.”

No, that’s not a head in my refrigerator, it’s a standing rib roast that’s been in there dry aging for a week. But it does look sorta like a head, doesn’t it?

It’s the main course for our family Christmas celebration on Tuesday 12/30, delayed almost a week because that’s when my son flies in from California. The Marines had important work for him to do that kept him away from us on Xmas.

The result is that the holiday feels like it’s never going to end.

Don’t get me wrong, I freakin’ love Christmas, but I swear to God it’s going to kill me. It seems that ten years ago I was a much more resilient merrymaker, able to eat, drink and party with greater abandon. Now? It takes much longer to recover from holiday indulgences.

But nobody said Christmas would be easy, did they? Consider the Maji, travelling through the desert for the original celebration of Christ’s birth. Their difficult journey — on stinky camels, probably — is thought to have taken six to eight weeks. Next to that, driving to Syracuse is a piece of cake.

So enough of my ungracious Christmas kvetching. Celebrate until it hurts this season and understand that in the pain you will certainly gain.