Lost might be overstating it, but it makes a much better headline than misdirected or mildly confused, wouldn’t you say?

Anyhow, I woke up on New Year’s Day in a strange house on the edge of Mother Myrick Mountain near Manchester. Our family ski vacation was a bust thanks to the lack of snow, but we turned it into a perfectly fine playing board games and drinking vacation.

So, the dogs and I greeted 2016 with a walk up the path behind the house. It led to a well travelled trail up the mountain, and the gradual climb was the perfect antidote for my throbbing head. We three went along until the human in the group had enough.

It’s not clear when things started looking unfamiliar, but somewhere on the way down it was obvious that we’d missed our turn. 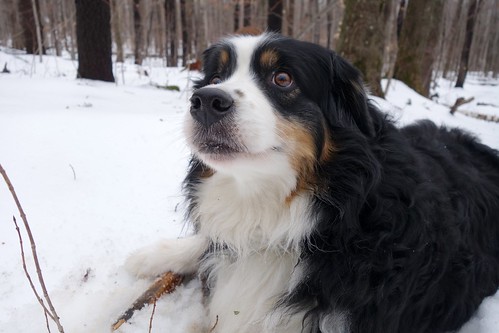 We walked and walked, and eventually emerged from the woods, at a point on the road some three miles from the house.

At worse this was an inconvenience.

There are few places in the northeast where you can really get lost these days. Keep going and you’ll come to a road, and if you’re luck you’ll turn right instead of left when you get to that road. Then , perhaps, you’ll have a half mile walk home, instead of a three mile walk. Oh, well.

This entry was posted in animals, Outdoors. Bookmark the permalink.