How long was it since my last visit to Albanyâ€™s Tulip Festival?

Yes, this sounds like the rambling of an increasingly crotchety old man, but hear me out.

If youâ€™ve been to the festival, you know that the area around the Moses statue is tulip central, the best spot to take in a riotous assortment of blooms like youâ€™ve never seen. Sure, thereâ€™s fair food and music and craft booths all over Washington Park, but this is the shit. Itâ€™s called the Tulip Festival, for a reason and here are the tulips.

Everywhere you looked, people stood with their arms in the air snapping away. If you wanted to take a picture of the tulips it would have been impossible to do it without seeing someone taking a selfie in the background.

It used to be that youâ€™d go somewhere and walk around and take in the sights. Now you go and take pictures of yourself.

Donâ€™t get me wrong, I think itâ€™s great that everyone now has a pretty good camera in their pocket. Itâ€™s never been easier to to take pictures and share them with friends and family, and thatâ€™s a big positive. But what does it say when weâ€™re so obsessed with the selfies? Look at what I saw has turned into look at me.

We fled the festival and headed for Thacher Park, where we saw not a single tulip and not one person taking a selfie.

Inspiration can come from many places. A book, a beautiful landscape, a moving experience… mine came from Chuck Miller. Let me explain.

You may know him. Among other things, Chuck is the Times Union’s most prolific blogger, a trivia whiz and a really good photographer. At lunch a few months ago, I whined that I felt I was in a creative doldrums, particularly in regard to my photography.

“Here’s what you do,” he said. “Pick a picture you like and get it printed and framed — then enter it in the Altamont fair in August.” This was good advice. I’ve been a photographer for forty years, but most of my work is hidden away in boxes or hard drives. Maybe setting a goal, even one as simple as getting one photo entered in the fair competition, was just what I needed.

I chose one of my favorite pictures, some pigs I saw at Peter’s Dairy Farm in Castleton. I was there to shoot Carmine Sprio milking a cow for his cooking show, Carmine’s Table, and happened to have my $20 plasticÂ Holga 120 with me. Those pigs are long gone — as is the cooking show — but the photo remains.

Anyway, I woke up this morning and saw Chuck’s blog post about how his Altamont Fair photo entries did — and nearly fell out of my chair when I saw that he posted a picture of my pig photo hanging at the fair with a blue ribbon under it.

What Chuck did for me was a small thing that made a big difference, but that’s the kind of guy he is, somebody who does small things that make a big difference. We could all learn something from the example he sets, not just on how to be a better photographer but about being a better person.

Since high school I’ve loved taking photos, and over the years have fooled around with many cameras, had a darkroom in the cellar and still shoot with film sometimes. I wouldn’t call myself a serious amateur, because I’ve seen serious amateurs and they are far more serious than I â€“ but enthusiast would be fair description.

So, I was thrilled when on my birthday, my wife handed me a gift certificate good for a day-long workshop with Adirondack photographer Carl Heilman II. You may not know his name, but you’ve seen his pictures. Heilman has been photographing the Adirondacks for 40 years in a way that only someone who embraces the outdoors can do, going wherever and whenever to capture the perfect image.

Yeah, you could learn a thing or two from a guy like that, so I signed up for his Winter LightÂ photo tour scheduled for the middle of February. You may have noticed it’s been cold outside, so the weather was certain to be a challenge. 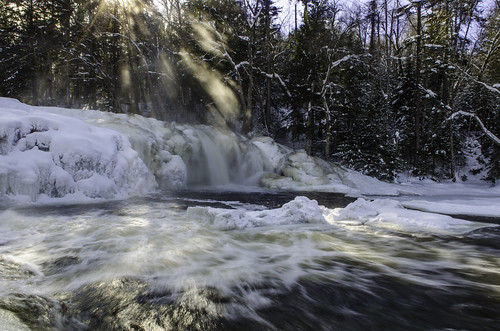 The first stop was at Buttermilk Falls near Long Lake. Our groupÂ took an easy trail to the icy shore where the water flowed despite temperatures hovering around zero.

We stopped at several spots that afternoon. Here on this bridge a woman in a fur paused in her Mercedes if ask if we were crazy, bundled head to toe as we scrambled around with our tripods. She may have had a point. 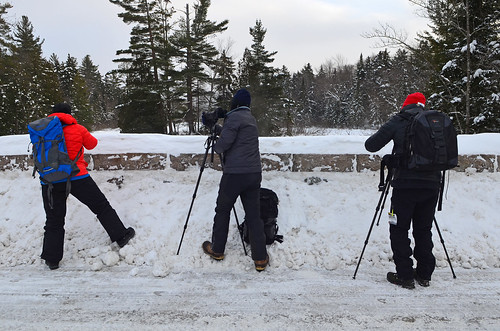 By 7pm we’d made our way to Saranac Lake with plenty of time to set up for the Winter Carnival fireworks. It was 12 below zero with a -28 wind chill but it didn’t seem bad until you’d peel off your mitten and screw around with your camera. Then it was cold â€“ but that was forgotten when the fireworks ignited. 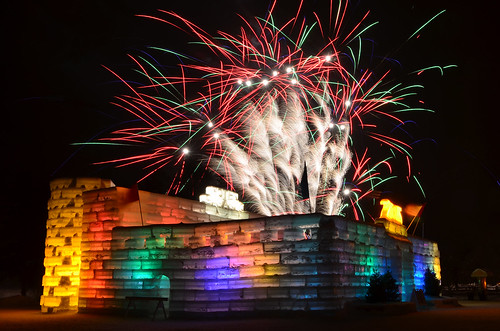 Overall, an amazing day. What did I learn? That after all these years I still need to work on my skills and knowledge, but that with patience â€“ and proper layering â€“ you can get great results.

This week you get a little break from my BS. Enjoy some pictures, instead.

At family parties, my Aunt Florie would make the rounds with her Polaroid camera. Aside from my father, I don’t remember any relatives taking pictures, and if I didÂ I certainly wouldn’t remember what camera they used, but Aunt Florie’s folding Polaroid was memorable.

But more memorable than the camera itself was what it did. In pre-digital 1970 there was nothing more magical than seeing your picture develop in a minute. We’d wait weeks (or months) to see photos my father took, once they were processed, organized into trays and projected in the living room, but Aunt Florie’s pictures? In your hand right away. To me there is still magic in instant film. I recently started fooling around with a 1969 vintage Polaroid 240, and while it’s temperamental and unpredictable, the results are very satisfying. The images are not as pristine as what you get from your digital camera, but there’s a warmth to them, like the visual equivalent of a vinyl record.

I suppose you could go into Photoshop and replicate the look, but there are some things that you just can’t do with a computer. Each instant picture is an original, and not something that can be faked on your electronic gizmo.

Imperfect, unique, somewhat fragile, and erratic. These pictures are more like us than the bits and bytes, don’t you think?

This iconic image of Grand Central Terminal, circa 1920,Â  is one of the great photos of all time — but it would be nearly impossible to shoot it today. Why? Smoking.

Particulate matter, aka smoke, has a magical effect on light, revealing its path in a beautiful way. Remove the smoke and there is nothing to diffuse the light. Yes, the light might still be lovely, but there is nothing in the air to trace its trajectory.

Photography has suffered for the health of our lungs.

Naturally, I was delighted when I spent a recent weekend in a smoky cabin at a Boy Scout camp. The atmosphere did nothing for my breathing, but for about an hour I enjoyedÂ striking beams of light. But alas, indoor smoking is rare these days — and seeing the light is hard to do unless you add your own smoke.Â In a world of digital rendering, it’s an analog effect that’s hard to fake.

But I’ll tell you what: you light up this cigar while I set up the tripod.